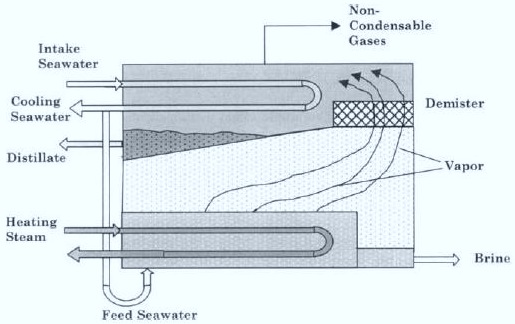 The basic form of evaporators is the submerged type,ref Fig

As is shown,the system is a combined unit of an evaporator and a condenser. In this system,the evaporator tubes are submerged in a liquid pool. The liquid surrounding the submerged tubes reaches saturation temperature and evaporation proceeds as the heating steam condenses inside the tubes. The formed vapor flows through a demister pad that removes the entrained liquid droplets. The vapor flows to the condenser, where it condenses on the outside surface of the condenser tubes. As condensation takes place, the latent heat of condensation preheats the feed liquid in the condenser before entering the evaporator unit.

Features of the submerged evaporator:

This design is used as a still or kettle reboiler. One of the most common uses
is the household humidifier and electric kettle.

The system is suitable if there is no danger of scaling or fouling.

If the system is prone to scaling or fouling, such as in desalination, use of antiscalent or adjustment of operating conditions is necessary to control the scaling rate. If scaling or fouling is not controlled then system operation may not be efficient. As mentioned before, operation of the submerged evaporator at these conditions would require prolonged cleaning time equal to or more than the actual production time.

The heat transfer coefficient for the submerged evaporator is much lower than that for the more common falling film design. This is because the hydrostatic head imposed by the liquid on the tube surface hinders formation, growth, and release of vapor bubbles on the hot surface.

Development of submerged evaporators is an active research area, especially in absence of fouling and scaling potential. The research focus on use of additive materials that enhance the evaporation process and limits the resistance caused by the liquid hydrostatic head.