In Extended Aeration, This process takes raw sewage directly into an aerated mix tank for 8 h or more to provide bacteria with optimum conditions to consume the BOD present in the wastewater. The effluent from this mix tank goes to a sedimentation tank where the flocculated colonies of organisms are settled to produce a clear overflow. 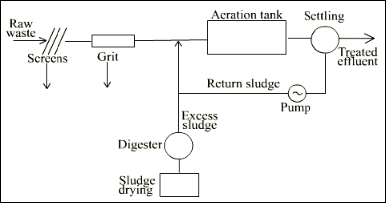 A portion of the settled microbial floc is returned to the head works and a portion sent to sludge disposal. The clear effluent is then directed to final treatment such as disinfection, perhaps passing through a final polishing filter. This method of treatment is particularly suited to plants that have a low concentration of settleable solids in the raw sewage. It minimizes the number of unit operations involved in smaller plants.

1 throught on "What is Extended Aeration?"