The falling film evaporator has two main configurations, which includes the horizontal and the vertical tube,The horizontal tube is the most common design used in the desalination industry.

The vertical tube falling film function describes are under

The liquid is introduced at the top part of the vertical tubes, where it form a falling film on the inside surface of the tubes.

The heating steam flows on the outside surface of the tubes, where it condenses and releases its latent heat to the falling film.

The heat exchange process result in steam condensation and evaporate ion of the liquid on the tube side.

Design and operation of the vertical tube configuration is more complex than the horizontal system. 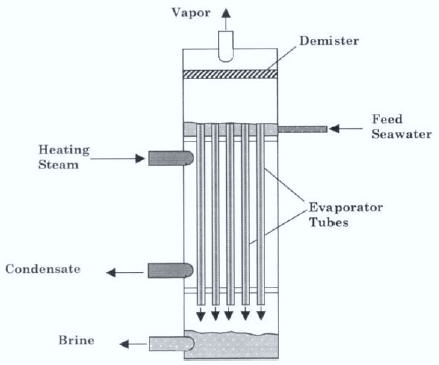 The falling film may collapse during its down pass and result in partial wetting of the surface. This result in dry patches or areas covered with very small amount of liquid. As a result,complete evaporation of the liquid, which would leave salt scaling on the tube surface. Also, formation of dry patches would result in increase in the surface temperature of the tube. This would result in increase of the thermal stresses as a result increase in the tube expansion in the hot spots. Ultimately, the tube operation life is reduced because of bucking, scaling, and increase in corrosion rates.

Weight of Water Related to the Weight of Air