The most basic solids differentiation is between settleable and floatable solids. An additional important differentiation is between volatile and non-volatile solids. A chemical or biological solid can potentially be removed from a wastewater by conversion through biological or chemical activity or incineration if the solid is organic and volatile (burnable at around 550°C). A volatile solid can also potentially be air or steam stripped or adsorbed. Much effort has been expended in developing an inexpensive test that better indicates biodegradability than volatility, but none has been as successful. It is cautioned that a chemical waste can have varying degrees of biodegradability even though it is completely volatile.
Settleable Solids. A liter of wastewater is settled in an Inhofe cone for one hour and the milliliters
of solids accumulating in the bottom is reported as settleable solids (S/S) in ml/l. See Figure. 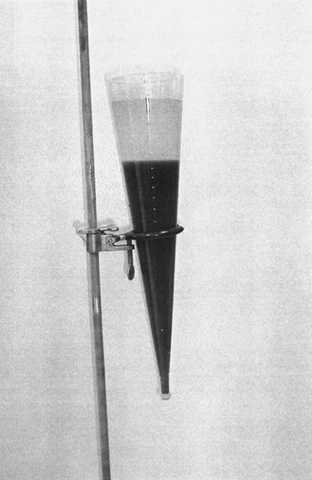 Flotable Solids. The quickest and simplest test for floatable solids is to test TSS as explained
above in a well mixed sample of the wastewater and then let the wastewater float quiescently for one hour. Then take a sample of the wastewater with a pipette from under the float and above any sediment.Run a TSS test on the second pipette sample and report as non-flotable, suspended solids (NFSS). The relation with TSS will be as follows:

If settable solids are present along with floatable solids, a S/S test must be run so that the relationship will be: TSS = FSS + NFSS + S/S