Electrodialysis:The ions in a water solution can be made to migrate by applying an electric field to the solution. By arranging various barriers to the flow of ions, it is possible to directly desalinate water with electricity. Such barriers are called ion-exchange membranes.

Membranes that allow a reasonable flow of cations, but block or reduce the flow of anions, are called cationic-exchange membranes.

Membranes that allow a reasonable flow of anions, but block or reduce the flow of cations, are called anion-exchange membranes.

Membranes that pass both anions and cations are called neutral membranes.

A.Theory. In solutions containing dissolved ions, electric currents are carried by movement of the ions.Positive ions migrate in the direction of the current flow, and negative ions migrate against the current direction.When the anions are blocked by a cationic-exchange membrane, they stop and form a localized charge at the membrane face. This accumulated negative charge is neutralized by the flow of cations across the cationic membrane.

Any number of pairs of cationic and anionic membranes can be placed across a current-carrying solution, such that the cationic membrane is closest to the negative electrode, and the solution between will be diluted. 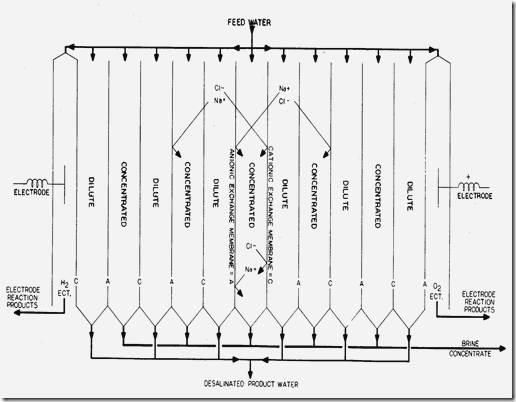 C.Electrodialysis reversal. One important improvement now used in electrodialysis installations is to reverse the polarity periodically and move the ions in the opposite direction.

This returns anions across the anionic membranes and helps break up scale formed on the concentrating face of the membranes. Water will flow osmotically across both membranes from the dilute product stream to the concentrated brine stream in an electrodialysis-reversal stack.